As a European mango trading center, the number of mangoes imported by the Netherlands accounts for more than half of the total imports of Europe every year. However, due to logistics or storage environment and other reasons, many damaged and rotten mangoes are directly discarded, resulting in waste and a certain negative impact on the environment.
The Dutch start-up company, fruitlether, founded in 2015, proposed a new solution to this problem: recycle these discarded mangoes into “pure leather”.
Turning waste into treasure:
Turn waste mango into pure leather
Fruitlether was founded by Hugo de boon and Koen Meerkerk. They were classmates in college and both graduated from Willem de Kooning Academy in Rotterdam, the Netherlands. During college, Hugo de boon and Koen Meerkerk were very keen to discuss topics related to circular economy and how to use what people defined as “useless” to create value.

Top left to right: Koen Meerkerk and Hugo de boon
They noted that the food and Agriculture Organization of the United Nations (FAO) once released a set of data: the weight of waste food worldwide is about 1.3 billion tons every year, equivalent to one third of the total food production; 45% of the fruits produced by farmers worldwide for consumption will eventually be discarded. According to this proportion, about 30% of the earth’s agricultural land is used to produce these eventually discarded fruits. In addition to wasting land resources, abandoned fruits will also cause a series of environmental problems. According to statistics, in some developed countries, 10% of greenhouse gases are emitted in the process of producing these fruits that will eventually be discarded. 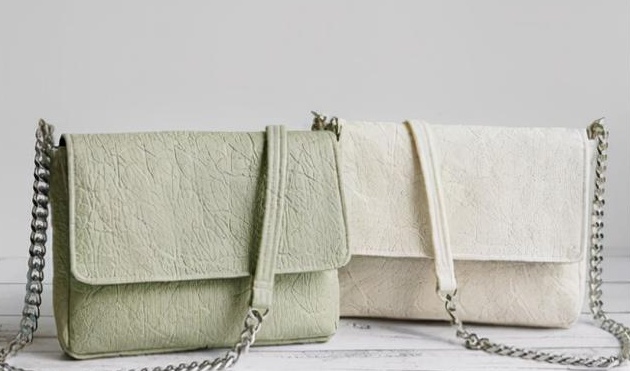 They also learned that in the fashion industry, the use of animal leather has also had a great negative impact on the environment. According to a set of data from PETA, more than 1 billion animals are slaughtered every year to obtain their fur. These fur produce about 650 million kilograms of carbon dioxide in the process of cleaning and making leather.
So Hugo de boon and Koen Meerkerk, who have a professional background in design, began to think, can waste food be turned into treasure? With this in mind, the two moved into the Rotterdam circular economy entrepreneurship incubation base – bluecity, where they started their own experiments. After many experiments, they thought that the leather made from mango was soft and tough. As the largest mango trading country in Europe, the Netherlands has a large number of discarded mangoes every year, so, They decided that the first product of fruitlether was pure leather made from mango.
At present, fruitlether has reached a long-term cooperation with total exotics, a local mango import company in the Netherlands. This company imports 6 million kilograms of mangoes every year, but in the process of quality control, about 1500 mangoes will be thrown away every week.
Anneke bouman, manager of quality assurance and Sustainable Development Department of total exotics, said: “in the past, I also wondered whether there was a new recycling method to prevent these mangoes from being discarded. Now it seems that giving them to fruitlether is the best choice.”.
At present, the price of leather made from each mango is between 49.99 euros and 60 euros. The price difference mainly depends on the size of the leather. The price of 56 x 38 cm is 49.99 euros, while the price of 60 x 40 cm leather is 60 euros.
Hugo de boon said that their goal is not to compete with the traditional leather industry. “We set up fruitlether not to completely replace the traditional leather, but to provide an alternative for this industry”.

How To Maintain The Leather Upholstered Chair

What Kind of Fabric is Microfiber Leather?

How to Identify the Quality of Microfiber Suede Leather?

When purchasing microfiber suede, we must make effective judgments. So, what kind of products have an advantage in quality? How can we judge its quality? This is a question that WINIW Microfiber wants to introduce to you today. Let us introduce you to the…

What Is The Difference Between PU Leather, Microfiber Leather And Real Leather

What Is The Difference Between PU Leather, Microfiber Leather And Real Leather
1.The difference in price. At present, the general price range of ordinary PU on the market is 15-30 (meters), while the price range of general microfiber leather is 50-150 (meters), so the price…

There are four main identification methods for microfiber leather. A brief introduction to its use is expected to help you in your future selection.

The first method to identify leather: Look. Look is mainly used to identify the type of leather and the quality of…

What Are Biodegradable Leather And Recycled Leather

What Are Biodegradable Leather And Recycled Leather

Biodegradable leather refers to artificial leather and synthetic leather that are discarded after being used. It is degraded and assimilated to produce water, carbon dioxide, methane, etc., and finally inorganic It is transformed into…

Microfiber leather is also a kind of artificial leather, but it is very durable, resistant to aging, and even better than ordinary leather.
If you can see the back or cross-section, it is easy to distinguish it from other artificial leathers….